Devoted
to preserving a heritage of providing quality legal counsel in keeping with the highest standards of the profession.

Generations of Success: One of Treasure Coast’s Oldest Law Firms 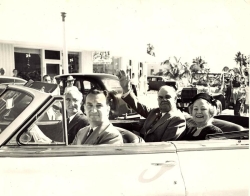 Crary Buchanan traces its roots back to 1927, when Evans Crary, Sr. was recruited from the University of Florida campus by Attorney Edwin Brobston III. Martin County had been created just two years before the 22-year-old Tampa native arrived to help the fledgling county and its new seat of government. Not long after Evans moved to town, his new employer moved away and left him in sole command of a busy legal practice.

Evans Crary, Sr. quickly became a leader, both in the new community and across the state. In 1930, the young attorney was elected to serve as Stuart’s municipal judge, a position he held for six years. In 1936, he was elected to represent Martin County in the Florida Legislature and he soon rose to prominence, becoming Speaker of the House of Representatives in 1945. Thereafter, he was elected to the Florida Senate, where he served an additional six years. Evans also held the position of County Attorney from 1932 to 1955. 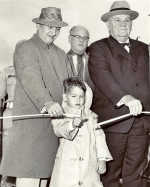 Throughout his life, Evans Crary, Sr. remained dedicated to serving the people of Martin County. He was active in many local organizations including the Stuart Chamber of Commerce, of which he was president, and the Stuart Rotary Club, which he helped to charter. He helped transform a former military base into Jonathan Dickinson State Park, sponsored bills to protect the environment, and worked tirelessly to obtain funding and approval for bridges leading to beaches. In 1966, his community honored him by naming the bridge across the St. Lucie River extending from Stuart to Sewall’s Point the Evans Crary, Sr. Bridge.

Evans Crary, Jr. joined his father’s law practice in 1954, which they renamed Crary & Crary a year later. Just like his father, Evans Jr. rose to the bench at a young age. Evans, Jr. was County Judge for Martin County from 1958 to 1964. He was every bit as active in community service and, like his father, he has always been widely admired for his integrity, professionalism, energy, and devotion to the community.

Larry Buchanan joined the law firm in 1967 and, in light of his legal and administrative talents, quickly became a manager at the firm. Like his partners, Larry was an active and admired leader in the civic organizations of the community. By the early 1970s the firm was known as Crary, Buchanan & Meginniss, until Walter Meginniss left to become an Assistant Attorney General in Tallahassee. 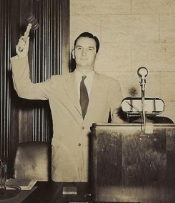 Crary Buchanan counts among its alumni a number of attorneys who now fill positions of prominence in our community. They include judges like the Honorable William L. Roby and the Honorable Darren Steele. The Honorable Alan O. Forst left the firm to accept a gubernatorial appointment as Chairman of Florida’s Unemployment Appeal Commission, a position he has held since 2001. State Senator Joe Negron, who previously served in Florida’s House of Representatives from 2000-2006, was also once a member of our law firm, as was Robert L. Lord, Jr., who now serves as Chief Legal Officer of Martin Health System. The attorneys of the firm are keenly aware of their ancestral connection to Martin County and the Treasure Coast and are dedicated to maintaining a legacy of upholding the highest standards of the legal profession.

Today, our firm consists of multiple attorneys who are board certified by the Florida Bar in their respective fields, as well as AV® Rated by Martindale-Hubbell®. These recognitions are testament to the legal professionalism, morality, and loyal representation that clients receive when working with Crary Buchanan. Our ultimate goal is to protect the best interests of our clients because we truly care about their well-being. As a client of our firm, you can be confident in knowing that we focus on representing clients, not cases.

Along with our more than 85 years of experience, our attorneys stay up-to-date on all legalities in Port St. Lucie and the Treasure Coast in order to best serve our clients. We promise to provide you with personalized attention and strategy as we work to achieve a favorable resolution on your behalf. Schedule your case evaluation with our firm by giving us a call at (888) 899-8161,

Crary Buchanan remains committed to carrying on the proud heritage of excellence bequeathed to us. To learn more about how our firm can help you, please contact our office today.