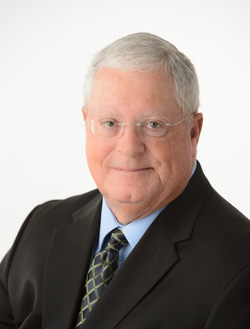 Jim is an active Florida Supreme Court certified circuit court civil mediator. As such, he helps clients resolve legal issues outside of the courtroom. Additionally, he is a Florida Supreme Court certified Arbitrator. As a member of the panel of neutrals in the American Arbitration Association (AAA) commercial division, Jim has experience handling a multitude of commercial claims, business claims, and disputes related to the healthcare industry. In the past, he has helped clients with claims that exceeded $1 million.

Jim has made appeals to the Florida Fourth District Court of Appeal and is certified in civil trial law by the Florida Bar. He is AV® Rated by Martindale-Hubbell® – a considerable achievement for any attorney – and believes that this honor is a genuine reflection of his commitment to giving clients the high-quality and ethical legal representation they need and deserve. In the past, Jim has served as President of the Marin County Bar Association. On multiple occasions, he has been appointed to serve on the 19th Judicial Circuit Judicial Nominating Commission by Governor Jeb Bush. Jim’s commitment to helping others extends past the courtroom. He has served as a member of the Vestry of St. Mary’s Episcopal Church for three terms and as President of the United Way of Martin County for two terms. Additionally, Jim served as a Captain in the United States Army JAGC for four years. As such, he handled courts-martial cases – including the first My Lai Massacre case during the Vietnam War.